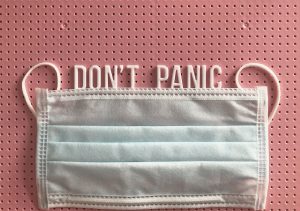 Is COVID-19 making people crazy? Are people watching too much negative news recently? Are people panicking unnecessarily? Are anxiety and panic as contagious as the Coronavirus itself? YES unfortunately.

The past few months have proven that people generally are not mentally prepared enough for crisis. Any sudden change of regular routines would easily throw them off balance. This is evidenced in recent panic buying of grocery and fighting over a roll of toilet paper. These scenes of Hollywood comedies are actually happening in real life. Recently, police have been frequently called in to sort out silly conflicts in supermarkets and retail stores between overly anxious and panic customers.

Talking about police, we too today had an interesting police incident.

This morning a customer and her husband called in police on us because we were late to an appointment and we didn’t return their emotional-charged messages fast enough. Yes I know, being late for an appointment was no good. But it wasn’t illegally, was it? The police officer actually turned up at our door and called us on behalf of the customer. Don’t laugh, it actually happened and I’m not writing a comedy script. Here is the story. A bride got married earlier than initially planned in another dress (thanks to Mr Covid) and she wanted to take her first dress back for a refund. The job hasn’t yet started and as usual we were more than happy to refund. But because we didn’t response fast enough their messages, they probably thought we were keeping her dress for some god-know reasons. She got panic and then her husband got panic together. Then out of desperation, they called the local police station for help. They nearly gave me a heart attack, I thought someone died.

On the phone, I couldn’t resist but to ask the police officer “Do police now have a new role of calling businesses for consumers?” If so, that would be handy. Next time when I want to make dinner booking, I can call the police station rather than the restaurant, because they can response faster. When I asked the police officer for his name or his police identification number, he refused to provide. Damn it. He was such a good customer service representative, how do I know who to call when I need to make my next restaurant booking.

Taking away the funny part of the incident, we weren’t angry with the customer but we were not impressed with how customers could quickly become irrational due to a mere small issue that could easily be resolved with a bit of patience and calm communications. The couple seemed to be reasonable people when I talked with them afterwards and they perhaps normally know how to handle unforeseen events constructively. So I don’t blame them. But I blame COVID-19 and how the news overly publicises it and is making people crazy.

Getting married during a pandemic is different but not necessarily challenging. As long as you view this new situation from a different angle and … END_OF_DOCUMENT_TOKEN_TO_BE_REPLACED

Is COVID-19 making people crazy? Are people watching too much negative news recently? Are people panicking unnecessarily? Are anxiety and panic as … END_OF_DOCUMENT_TOKEN_TO_BE_REPLACED

ALL FITTINGS AND CONSULTATIONS ARE BY APPOINTMENT ONLY. PLEASE MAINTAIN A SAFE SOCIAL DISTANCE OF MINIMUM 1.5M BETWEEN EACH OTHER AND OUR STAFFS … END_OF_DOCUMENT_TOKEN_TO_BE_REPLACED

Good dress alterations require understanding of the female body and knowledge of dress pattern-making. The more sophisticated the dress is made, the … END_OF_DOCUMENT_TOKEN_TO_BE_REPLACED

There is no doubt everyone and every businesses are hugely affected by the coronavirus. We all have to accept the fact that everyone has to make … END_OF_DOCUMENT_TOKEN_TO_BE_REPLACED

A common question modern brides often have in mind is whether they should look for their wedding dress online or from a local retailer. It depends on … END_OF_DOCUMENT_TOKEN_TO_BE_REPLACED

La Couturier Alterations
4.8
Based on 100 reviews

Lach Brown
03:17 23 Jun 20
I had a very delicate cashmere shawl peppered with moth holes invisibly mended by Tsu. She did a lovely job. Thank-you... Tsuread more

Lisa Guan
10:37 15 Jun 20
Tsu did an absolutely amazing job. She got the job done within a week due to my tight schedule. We explored different... was to alter the piece to my fit and we FOUND IT! Definitely recommend La Couturier Alterations. Keep up the good work!read more

Barbara Douglas
05:12 25 May 20
Large eaten holes in a possum jacket - perfectly mended - would never know they were there

Georgina Bonner
10:17 04 Mar 20
Absolutely brilliant service. Had a very short turn around for alterations on a bridesmaid dress I’m wearing in the... UK. It was too big and required shortening and a whole zip replacement to fit properly whilst ensuring the all over beading stayed intact. It now fits like a glove, and looks stunning! The workmanship is incredible and all done with plenty of time before my flight to the UK. THANK you - amazing serviceread more

Harriet Ellison
02:01 16 Jan 20
Cannot recommend enough!! Absolutely loved my dress, I had a strapless dress with a lace bolero as I wanted my... shoulders/arms covered but the strapless dress was perfect in every other way. So I had the bolero sewn to the dress along with a bra sewn into the dress. I was so happy with the results it looked perfect and no one knew that they were separate pieces to begin with! Pricing is great for the service you receive! Thank you xread more

Wenona Kimber
22:26 13 Mar 19
Tsu was kind enough to take my dress last minute and fix the issues after ordering online and losing too much... weight. She did any excellent job and this bridesmaids dress will serve me well for both my cousins wedding and galas one the future. I'm very grateful to herread more
Next Reviews